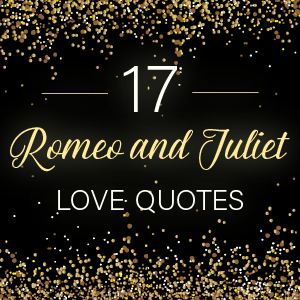 Romeo and Juliet’s love is one of the most beloved, and tragic, in all of classic literature.

But though it’s possibly the most famous love story ever written, many of its quotes are difficult to remember and hard to place within the larger context of the story. Who said “But loft! What light through yonder window breaks?” Besides Romeo and Juliet, who were some of the other characters who had a large impact on the story? What’s the actual context for these quotes, including the surrounding circumstances of the characters at the time?

With the above in mind, here’s a collection of 17 Romeo and Juliet love quotes that truly stand the test of time.

Shakespeare was, of course, a master of the sonnet form. Throughout his life he composed a total of 154 collected sonnets, not including the sonnets in his dozens of dramas.

Did you know that you can read The Tragedy of Romeo and Juliet for free at Project Gutenberg? You can also read the whole play, love quotes and all, on our full-text Romeo and Juliet poster.

What about you? Did we miss your favorite Romeo and Juliet love quote? If you have any suggestions, let us know in the comments below!

Guest
what is true love
Share On TwitterShare On Google

romeo and juliet is the best love story i totally inspire this story ,thank you for sharing this blog of love story

Glad you enjoyed the article. Thanks for the comment! ?

Lol it’s literally about all the mistakes they made that caused their deaths though.

Well, what more can you expect from Shakespeare’s most famous tragedy? ?

happiness is finding peace within yourself.
great quotes
thank you for sharing

Glad you enjoyed the article, Shivangi. ?

This is a good article about important quotes

Wonderful, these are great, especially when your doing something for your English teacher before you leave 9th grade :3

I’m glad our article was helpful. Good luck on your assignment!

thanks andrea, really gonna help during my gcses

Thanks for the comment, Scott. Good luck on your exam!

Thank you, Mrs. Schlottman. I am just working on my English assignment, an essay about the theme of love in Romeo and Juliet and this article was very helpful, thank you so much for explaining the quotes too.

Glad our article was helpful. ? I hope all goes well with your assignment!

The interpretation on these poems are pretty impressive! Romeo & Juliet is an absolute classic that should be preserved for today’s generation and for the next. Good job right there!

Glad you enjoyed the article, Francheska!

Thanks. Great way to grab quotes for my pre-reading journals in 9th grade. I picked this one: Wisely and slow; they stumble that run fast.
Friar Lawrence (Act 2, Scene 3)

i am trying to find a quote the represents the loving relationship between Romeo and Juliet for an assignment but none of the quotes i have looked at seem to be just right. very helpful article though!